«All the monuments are inferior to the Caesar’s amphitheater, fame will celebrate this only for everyone», with these words Marco Valerio Marziale, one of the greatest and most important poets of the Roman Empire, praises the praises and magnificence of the Colosseum.

Known to the ancient Romans as Amphitheatrum Flavium , and located in the heart of the city of Rome, the Colosseum as well as being the most impressive monument of ancient Rome is also the largest amphitheater in the world, capable of holding up to ninety thousand spectators.

The term “Colosseum”, which derives from the Latin adjective ” colosseum ” which can be translated into colossal or gigantic, only spread in the Middle Ages because the statue of the Colossus of Nero stood a few meters from the amphitheater .

The beginning of the works for its construction are dated in the year 71 AD, by the will of the emperor Vespasian. The area chosen for the construction of the Colosseum was a valley between the Velia, the Oppio hill and the Celio, where the stagnum mentioned by the poet Martial was located, which Nero had excavated for his own Domus Aurea.. This body of water, fed by springs that flowed from the foundations of the Tempio del Divo Claudio sul Celio, became the basis of a new construction and highlighted Vespasian’s “remedial” gesture against the old policy of the “tyrant” Nero, who had usurped the public land destined for own use. Vespasian had the aqueduct hijacked for civil use, reclaimed the lake and had foundations cast there, more resistant where the cavea should have been built. The building was the first large stable amphitheater in Rome, after two minor or temporary structures from the Julio-Claudian era and after one hundred and fifty years from the first amphitheaters in Campania. Vespasian saw the construction of the first two floors before he died in 79 AD

The Colosseum with Titus

In 80 AD Titus, son of Vespasian, inaugurated it by starting a hundred days of games during which, according to sources, representations of famous battles would alternate with real naval battles, hunting shows and dramas based on classical mythology . Right from the start, the building became a symbol of the imperial city, an expression of a celebratory ideology that defined real models of politics and, to put it in modern terms, of the creation of consensus among the people. Hence the famous Latin phrase “ panem et circenses ”, literally bread and circus games, used in ancient Rome to summarize the aspirations of the plebs, or, in contemporary times, in reference to demagogic political strategies.

The Colosseum with Domitian

When Titus died in 81 AD, his brother Cesare Domiziano Augusto Germanico came to power, the last of the Flavian dynasty , who completed the works begun by Vespasian, making important changes to the hypogeum and completing the construction of the “Meta Sudans” fountain. Domiziano will also build a complex system of masonry basements to replace the wooden works. These undergrounds will have different functions related to the shows. These changes no longer allowed the arena to flood and the “naumachia” became impossible. From Domitian onwards, the arena was reserved for the “munera”, gladiator games, and for the “venationes”, the hunting of wild animals. 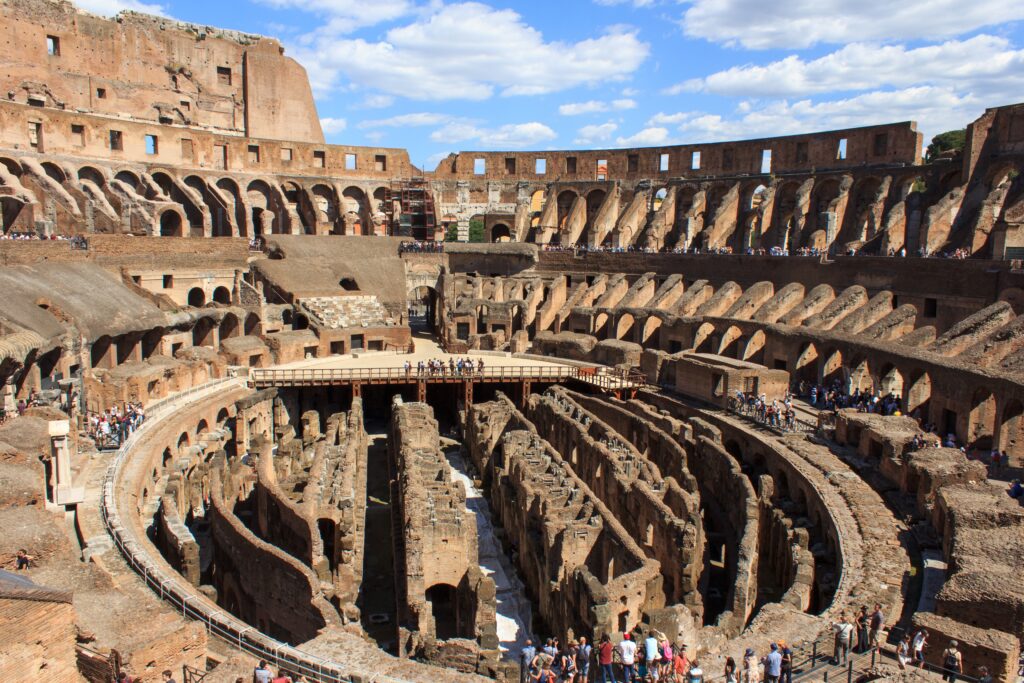 Adjacent to the amphitheater some service buildings were erected for the games: the ludi (barracks and training places for gladiators, among which the Magnus , the Gallicus , the Matutinus and the Dacicus are known), the barracks of the detachment of the sailors of the Classis Misenensis (the Roman fleet based in Miseno) used for maneuvering the velarium , the summum choragium and the armamentaria (depots of weapons and equipment), the sanatorium (place of treatment for the wounds of the fighting) and the spoliarum a place in where the remains of gladiators who died in combat were treated.

After 410 AD, the intended use of the amphitheater changed radically, first becoming a place where wild animals were killed, then a cemetery and in the 10th century a place of residence and building workshops.

Today it is the most famous Italian icon in the world, in 1980 it was included in the list of World Heritage Sites by UNESCO , and in 2007 it was the only European monument included among the New Seven Wonders of the World reported. The Colosseum represents the symbol of the city and of the ancient Roman Empire and is one of the major tourist attractions in terms of number of visitors throughout Italy, with about eight million visitors every year.

Let’s discover the Colosseum and its history with Touring Fixer: take a look to our tours.